PMS offers a complete end-to-end Workplace Mediation Service that meets with the affected staff, assesses the potential conflict-resolution approaches and then guides the parties through a restorative dialogue.  Applying a restorative approach to disagreements is highly beneficial in a commercial environment where discord and tension can severely hinder a business’s opportunity to operate efficiently and pursue strategic goals (that rely on team work and a collective vision).  Where an employer seeks to address conflict by apportioning blame, this will rarely recreate the collaborative working environment that preceded the dispute.  In comparison, a restorative approach that promotes effective dialogue and a greater understanding of the team members’ perspectives can actually improve employees ability to work together and deliver objectives. 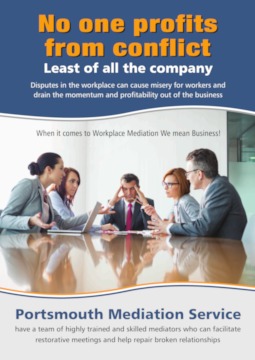 Portsmouth Mediation Service (PMS) was contacted by a local service company that had an unresolved workplace conflict between two key employees. Both parties were female, and the dispute had been escalating over a 12-month period.  The company did have a grievance process in place, but previous attempts to settle the dispute had been unsuccessful and so they decided to try a different approach.

The conflict centred around promotion opportunities and agreements between a manger and her director.  The dispute had escalated to a point where the department was no longer able to function effectively, and the manager was being paid to remain at home pending further investigation into the matter.

PMS provided two experienced workplace mediators who met with both parties separately and then facilitated a joint meeting whereby both individuals were provided with an opportunity to share their frustrations and concerns in a calm and managed environment.  This restorative meeting was a very positive and emotional affair, enabling both ladies parties to understand each other’s situation. This resulted in the manager returning to work and a renewed sense of purpose for all concerned.

PMS were unable to assess the genuine full financial impact cost of the dispute on the business, but given that the matter had been ongoing for 12 months and this conflict had undoubtedly affected not only productivity, but the general work environment and morale, the cost is likely to have been significant.  PMS encourages businesses to engage with it early in order to resolve disputes, restore working relationships and allow the team to get back on track with minimal disruption.

We use cookies to ensure that we give you the best experience on our website. If you continue to use this site we will assume that you are happy with it.OKPrivacy policy